Black and white photography of Moritz Schoof. Below the photograph information about the photographer "Bernhard Wagner Carlsbad". At the back, written by hand with ink "M. Schoof geb. in Radegast" and additional information about the photostudio.
Moritz Schoof was managing director of Tonwarenfabrik Kelsch and married in 1874(?) Amalie Kelsch, the daughter of the owner Carl Kelsch. After the death of Carl Kelsch in 1878 Moritz Schoof and his brother Ottomar bought the Tonwarenbabrik, which now was working under the name "C. Kelsch Tonwaarenfabrik Gebr. Schoof". In 1884 Ottomar Schoof died. The factory existed at least until the beginning of WW II. 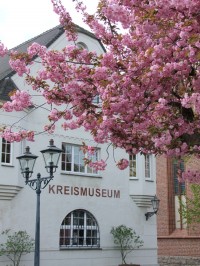 Cite this page
CC-BY-NC-SA @ Kreismuseum Bitterfeld
The textual information presented here is free for non-commercial usage if the source is named. (Creative Commons Lizenz 3.0, by-nc-sa) Please name as source not only the internet representation but also the name of the museum.
Rights for the images are shown below the large images (which are accessible by clicking on the smaller images). If nothing different is mentioned there the same regulation as for textual information applies.
Any commercial usage of text or image demands communication with the museum.