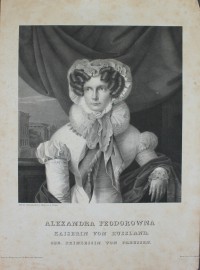 Charlotte was the eldest surviving daughter of King Frederick William III of Prussia (r. 1797–1840) and of Queen Louise of Prussia. Her childhood was marked by the Napoleonic wars and by the death (1810) of her mother when Charlotte was just twelve years old.

In 1814 the Russian imperial family arranged her marriage – for political reasons – with Grand Duke Nicholas Pavlovich of Russia,who later became Emperor Nicholas I. The couple married on 1 July 1817. Upon her marriage, Charlotte converted to Russian Orthodoxy, and took the Russian name Alexandra Feodorovna. Ideally matched with her husband, she had a happy marriage that produced a large family; seven of her children survived childhood." - (en.wikipedia.org 08.11.2019) 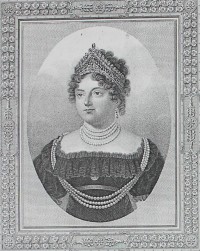