"In Greek mythology, Prometheus (/prəˈmiːθiːəs/; Greek: Προμηθεύς, pronounced [promɛːtʰéu̯s], possibly meaning "forethought") is a Titan, culture hero, and trickster figure who is credited with the creation of humanity from clay, and who defies the gods by stealing fire and giving it to humanity as civilization. Prometheus is known for his intelligence and as a champion of humankind and also seen as the author of the human arts and sciences generally. He is sometimes presented as the father of Deucalion, the hero of the flood story.

The punishment of Prometheus as a consequence of the theft is a major theme of his, and is a popular subject of both ancient and modern culture. Zeus, king of the Olympian gods, sentenced the Titan to eternal torment for his transgression. The immortal was bound to a rock, where each day an eagle, the emblem of Zeus, was sent to eat Prometheus´ liver, which would then grow back overnight to be eaten again the next day. (In ancient Greece, the liver was often thought to be the seat of human emotions.) Prometheus was eventually freed by the hero Heracles." - (en.wikipedia.org 30.10.2019) 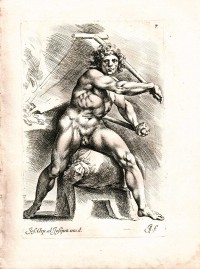 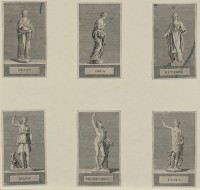