"Hendrick de Clerck (before 1570 - 27 August 1630) was a Flemish painter active in Rome and Brussels during the late sixteenth and early seventeenth centuries. Stylistically he belongs to the late Mannerist generation of artists preceding Peter Paul Rubens and the Flemish Baroque, and his paintings are very similar to his contemporary Marten de Vos.[1] His date of birth is unknown, but by 1587 he was working with Frans van den Casteele in Rome.[1] In 1594 he was back in Brussels employed as court painter to Archduke Ernest, a position he continued to hold in the service of the Archdukes Albert and Isabella following Ernest’s death in 1596." (Wikipedia (en), 22.04.2014) 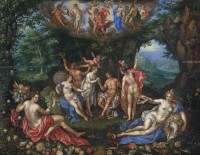