"Lazarus of Bethany, also known as Saint Lazarus or Lazarus of the Four Days, venerated in the Eastern Orthodox Church as (Righteous) Lazarus the Four Days Dead after he rose again, is the subject of a prominent miracle of Jesus in the Gospel of John, in which Jesus restores him to life four days after his death. The Eastern Orthodox and Roman Catholic traditions offer varying accounts of the later events of his life.

In the context of the seven signs in the Gospel of John, the raising of Lazarus is the climactic narrative: exemplifying the power of Jesus "over the last and most irresistible enemy of humanity—death. For this reason it is given a prominent place in the gospel."" - (en.wikipedia.org 24.11.2019) 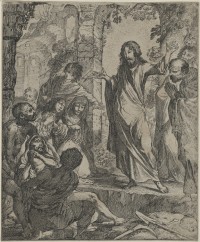