Ortlepp was born in Droyßig near Zeitz as the son of a Lutheran priest. He went to school in Pforta until he was 19 years old and then studied theology and philosophy in Leipzig. He left the university in 1824 without taking a degree.

Ortlepp returned to Leipzig during the thirties of the 19th century and became famous for his political poems. Some of them were dedicated to Poland and its struggle for independence. Around this time he became an acquaintance of the young Richard Wagner (Ortlepp also met Johann Wolfgang von Goethe a few years before). His critical statements in Fieschi alarmed the Austrian statesman Metternich, who used his power to forbid the further publishment of this poem. Ortlepp finally became Leipzig´s persona non grata in 1836." - (en.wikipedia.org 27.10.2019) 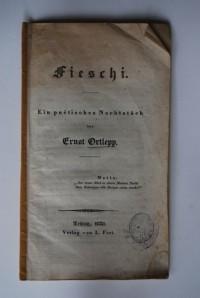